The primary source documents collected in Frontier Life: Borderlands, Settlement & Colonial Encounters help us to understand existence and consequences on the various frontiers that arose from the movements of Europeans to Africa, Australasia and North America.

The earliest documents in this collection are from the seventeenth century but the majority of the material originates from the eighteenth and nineteenth centuries. The material covering North America covers the varied frontier regions from fur trappers in Canada to cowboys in Texas and government in Baja California. It is divided into the frontier regions of the American East, the American Midwest, the American Southwest, California & Mexico and Canada. It covers the exploration of these regions followed by trade with native peoples, colonial rivalries, expansion of government and new nations and the final settlement and ‘closing’ of the frontier.

Africa is mainly represented by its frontiers of the south with the British colonial expansion into modern day South Africa. There are also excellent clusters of material relating to the exploration of West Africa and the colonial administration of Lagos.

The beginnings of European Australia and New Zealand are covered by British government documents, starting with Arthur Phillip and the penal colony at Sydney. The frontiers of other parts of Australia are also covered by documents from the UK National Archives and some material from Australian archives.

Finally, there is some material relating to Central America, specifically British Honduras (Belize), in the form of the George Arthur Papers. George Arthur’s career here relates to the other regions featured here as he spent time on the Canadian and Australian frontiers. 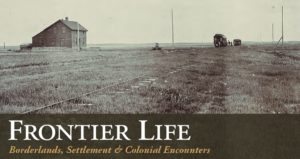